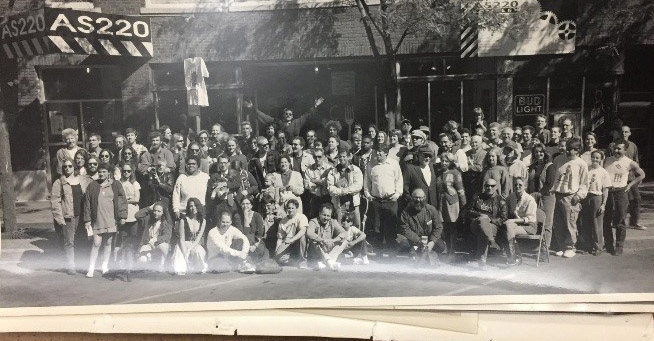 The Special Collections Department at Providence Public Library (PPL) has opened the AS220 Archives to the public for research. Founded in 1985, AS220 is credited as a national model for urban revitalization and in its advocacy for the role of artists and art practice within community development.

PPL acquired the organizational archives of AS220, a nationally recognized arts organization in Providence, Rhode Island, in January 2017. Organization and description of the collection was completed in the past year with support of a grant from the National Historical Publications & Records Commission (NHPRC).

“The archives of AS220 are a significant addition to the Library’s special collections and enrich existing materials that document the creative and cultural history of Providence,” said Jack Martin, PPL Executive Director. “One of our broader goals with our special and the Rhode Island Collections is to have them serve as useful resources for artists, designers, and the entire creative community. Preserving and providing access to this important archive is paramount to our mission.”

“AS220 is thrilled that Providence Public Library has acquired, preserved and is now providing public access to our archives,” said David Dvorchak, Communications Director for AS220. “This collection contains a 32-year history, not only of our organization, but a record of how downtown Providence became the thriving hub of arts and culture in Rhode Island that it is today.”

The organizational archives of AS220 encompass over 30 years of organizational records, including the creative output of artists, performers and musicians who have used their venues to create and showcase their work. The initial donation to PPL includes over 110 linear feet of records representing a wide variety of types and formats — such as planning documents, building plans, press releases and promotional posters, menus, publications and reports, artist applications, booking records for events, photographs, recordings of musical performances, recordings of a public access television show, and original artwork. Included is over 700 gigabytes of digitized files created to document the history of the organization.

Specific topics of interest include:

“The creative output of AS220 is both a time capsule of Providence history, and a testament to the work AS220 has done to support the city’s artistic spirit. This collection represents the complex cultural and creative relationships and work that inspires the concept of Providence as the ‘Creative Capital,’ ” said Kate Wells, Curator of Rhode Island Collections

“Strange, improbable, deeply-motivated, and wry, the story of how a small art collective became part of the redemption of a corrupt, post-industrial city is definitely worth preserving,” noted Janaya Kizzie, AS220 Project Archivist.

Materials from the AS220 Collection will be on display in PPL’s Providence Journal Rhode Island Room from August-September. An event to celebrate the archives is scheduled for September 12, 2018.

PPL will continue to digitize content from the AS220 Archives where it will be accessible via www.provlibdigital.org. This work will be ongoing.