My Library Account
Skip to content
Our stacks and upper levels are open. | Come in for a tour!   |  Reopening News  |  En Español  |  Connect With Us 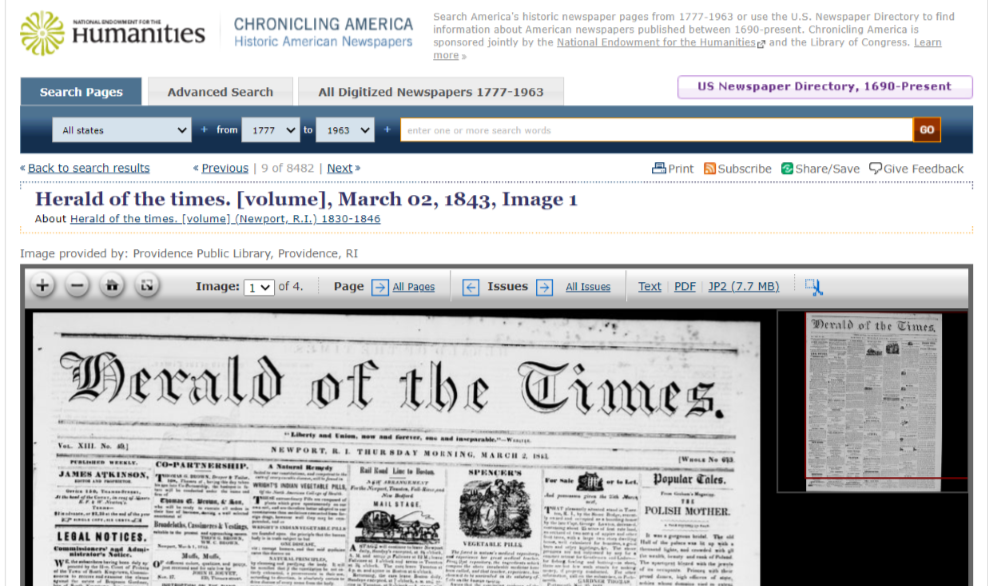 In 2019, the two organizations were awarded a $250,000 NDNP grant from the National Endowment for the Humanities and the Library of Congress to digitize historic newspapers and make them available via Chronicling America for the first time. The NDNP supports the creation of a national, digital resource of historically significant newspapers published between 1690 and 1963, from all states and U.S. territories. PPL and RIHS have commited to digitizing more than 50,000 pages of historic newspaper content by August 2021.

The project funds were awarded following a letter of support by Senator Jack Reed, who noted the RIHS’s remarkable historical collection of microfilm reels of 314 Rhode Island newspaper titles that ceased publication prior to 1923, but remained unavailable for research.  The grant funding will enable PPL, in partnership with the RIHS, to complete a full inventory of master microfilm reels, digitize at least 100,000 pages, and market and promote these digital resources to the broader community.

While additional titles will become available as the project is ongoing, this first batch includes almost 9,000 pages from:

The addition of the Newport Gazette brings the earliest published newspaper to be included in Chronicling America to date. The paper was published by British forces occupying Newport using the printing press of Solomon Southwick. Southwick was the printer of the pro-Revolutionary Newport Mercury and had buried his press in an effort to keep it out of enemy hands. Despite his efforts, British forces found and dug up the press and used it to print their own paper.

In addition, the first batch includes other titles of interest such as: The Pioneer Woman’s Advocate, published by Miss Anna Spence in Providence and which advocated for suffrage and women’s rights during the 1850s;  The Literary Echo & Pawcatuck Advertiser published in the southern coastal community of Westerly and covering parts of southeasten Connecticut; and The Northern Star and Warren and Bristol Gazette out of the port town of Warren in the early 19th Century as it transformed from an economy built on the Atlantic Slave Trade. Prior to this award, many of these newspapers were only available on microfilm at the RIHS and required researchers to use them in person. Now available online, they are now open electronically to researchers across the world and in context with other papers from across the country.

“The newspapers we’re digitizing are among the most valuable resources available for researchers, scholars, and anyone curious about history,” said Jordan Goffin, Head Curator of Collections at PPL. “We’re very excited that we can finally bring them to the public free of charge, as well as for another opportunity to collaborate with our colleagues at the Rhode Island Historical Society.”

“Our delight in this project cannot be overstated. It is the culmination of an effort to make these newspapers accessible since the 1950s, when the RIHS began microfilming them. This is one of the purest ways in which we fulfill our mission to share Rhode Island’s past.” said Richard J. Ring, Deputy Executive Director for Collections and Interpretation at RIHS. “We are off to a promising start in this partnership with Providence Public Library and truly appreciative of the support of the Library of Congress.”

PPL is an independent, non-profit organization founded in 1875, governed by a Board of Trustees, and supported primarily through private funding sources, including its own PPL Foundation. The Library also serves as the Statewide Reference Resource Center holding unique collections and resources. PPL inspires Rhode Islanders to be lifelong learners by engaging their curiosity and offering access to extraordinary experiences, resources, and ideas. For more, visit www.provlib.org.

Founded in 1822, the RIHS, a Smithsonian Affiliate, is the fourth-oldest historical society in the United States and is Rhode Island’s largest and oldest historical organization. In Providence, the RIHS owns and operates the John Brown House Museum, a designated National Historic Landmark, built in 1788; the Aldrich House, built in 1822 and used for administration and public programs; and the Mary Elizabeth Robinson Research Center, where archival, book and image collections are housed. In Woonsocket, the RIHS manages the Museum of Work and Culture, a community museum examining the industrial history of northern Rhode Island and of the workers and settlers, especially French-Canadians, who made it one of the state’s most distinctive areas. For more information see: www.rihs.org